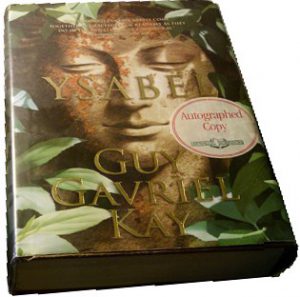 A Tale Between Times

Imagine the present time with a mystical mist threading its way through it. And then have two more mystic threads entering the scene. Both from conquering peoples of long ago, with one trying to vanquish the other. Ysabel by Guy Gavriel Kay is such a tale. From the long ago the bones and footprints of history come alive.

Ysabel is a tale between times. It is a tale of a tangled love triangle between those of long ago with ensuing competition and violence. And it is also one of my favourite books, one of those meant to be reread over and over.

I first met Guy when I accidentally picked up his book Tigana. Accidentally because I left the book I was already reading behind in its place! I certainly didn’t regret this as the book proved to be a wonderful read.

Recently I was looking up lists of top fantasy books and found Guy’s name mentioned a few times for other books and this brought Ysabel back into my mind again.

I think what makes this book truly rewarding is that the author loves history and generally his tales have this as a basis and are set in those times. The major difference with Ysabel is that the history is a shadow story in the background but the past protagonists appear in the now along with the modern day ones. In fact this is a really good Urban Fantasy tale, incorporating history and hints of Young Adult fantasy (as the modern protagonist, Ned, is a young lad approaching adulthood).

Guy is a maestro writer and uses the English language masterfully. His words paint pictures in your mind.

A Different Sort of Tale 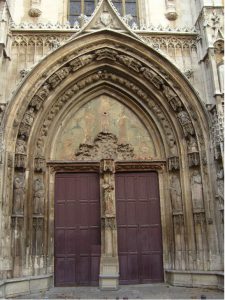 Guy Gavriel Kay changed his format when writing Ysabel. No longer are we only travelling the roads and waterways of the past. In Ysabel we are moving along the roads of both now and then. The main team lives in present day Canada but travels the world as Ned’s dad, a photographer, compiles sets of photos for various reasons, in this case, a Coffee Table book of the city of Aix-en-Provence region. The photography commences in Saint Sauveur Cathedral.

As Ned’s mum is away in the north east region of Africa in Sudan working as part of Médecins Sans Frontières Ned has managed to get out of high school two months early so he can accompany his dad.

From the past we have the Romans and the Celts. Two violently warring peoples; the Celts defending their land and the Romans on their way to building their empire. And I really expect that before Celts were others who they had driven west as the list of various ‘tribes’ in that area is quite extensive.

Certainly the Greek antecedents travelled the fringe of the Great Sea aka (also known as) the Mediterranean Sea. They sought trade to increase the wealth of their city states.

These traders established the city that is now known as Marseilles, 30km south of Aix.

As you follow the story you will find that its history follows very closely to what has actually happened in Aix and the surrounding country side. This brings the book to life as the characters seem vividly real.

I expect a few details were modified (a tomb is in the cathedral inside the city walls but this never occurred at this time in history). And a few details are most likely enhanced such as the number slaughtered in massacres. 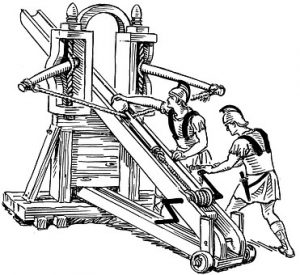 All the places that are mentioned exist and the battles and other events did happen. History records an epic battle between the Celts and Romans where a huge amount of lives were lost. Ysabel has its own interpretation of  this battle and, as no-one around at the time of the original battle is still alive (unless they are longer lived than Methuselah), who is to say it didn’t happen quite this way.

I am sure the Romans suffered significant losses but the Romans were sneakier so they still managed to win!

But as most of those slain, for the time this story started, were the various tribes of the Celts the number presented in Ysabel might in fact be fairly accurate.

The book can almost be taken as a travelogue for the Aix-en-Provence area. A travelogue with an ancient twist.

For instance the tale commences at the Saint-Sauveur Cathedral (in the present time known as Aix Cathedral). True to history the tale’s cathedral has Roman ties (it is built over a Roman road – in actuality a Roman forum).  Over time many peoples contributed to its architecture until now it is an intriguing medley.

The Celts originally dwelt around Entremont, an Iron Age oppidum that had been

wiped out before Ysabel begins.   It is a locality of Celtic lore. Celtic hoards of the ancestor and enemy skulls have been found in the area. Strange things are still believed to occur at Beltaine on May Day. They certainly do in Ysabel. And the world changes.

The epic battle to rule the area took place near Mont Sainte-Victoire. Some historians believe that the Roman Empire exists only because the Celts were defeated here.

Now we have this glorious setting, one that the famous Paul Cézanne frequently painted. A setting over imposed by the violent history, in the case of Ysabel, of the massacre of Celts by the Romans in the immediate vicinity of Mont Sainte-Victoire. 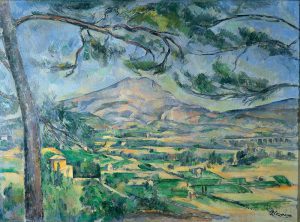 History impacts in different ways on different places. Aix has been fought over and overrun many times over the centuries. What a wonderful setting for the tale to take place in. Ysabel flows with this history and wraps over and through it with remarkable ease and skill.

The atmosphere and the emotions, the behaviour of the characters are all stroked and stoked, even those who shouldn’t exist in this time and place.

To the World of Today

And as it should, with the tale predominantly told in the present, so it ends here. The ending is somewhat unexpected but is totally satisfying. 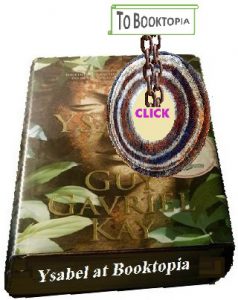 I recommend this book very highly and I am sure if you decide to enjoy it you too will be very satisfied with the ebb and flow of this little piece of urban historical fantasy.

Ysabel the book can be found at various venues including Booktopia. Grab a copy and curl up in your favourite chair with pet on lap and settle in for a great read. If you are like me, make sure you have a cup of coffee or tea and a very large chocolate bar so you don’t disturb either the pet or the reading.

found as an eBook at Kobo. This way you can read at night and not have to get up and turn the light on and off. Stay warm and cosy in bed and read on.

And by the way be prepared for the pet, in my case Katie the cat, to stand on the eReader and change pages so fast you have to spend time to figure out where you were!

While you are taking a look at this book browse through Guy Gavriel Kay’s other tales. I haven’t yet found any that I would hesitate over reading again.

Finally, if you don’t yet have an eReader take a look at my Why Buy Kobo eReaders post.