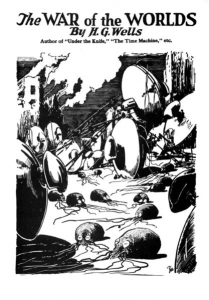 The Martians have landed and the War of the Worlds commences. The book The War of the Worlds was brought back to my mind recently for no apparent reason.  I  believe someone mentioned Orson Wells while a group of us were talking about the absolute belief quite a few people have in the media.  (A friend of mine once worked at a club where journalists and reporters relaxed after meeting their late night deadlines.  They told her that their motto was ‘never let the facts ruin a good story’.)

War of the Worlds is an absolutely wonderful science fiction tale written by Englishman HG Wells.  Well I thought to myself I haven’t read that in ages so let’s pull it and read it again.

The Real War of the Worlds!

HG Wells set his 1898 story at Horsell near Woking in Surrey, a county to the south west of London. Nowadays I suspect it is much closer than it was in late 1890s, as London has expanded to become what is now Greater London.  Oh dear part of Surrey has been swallowed – most likely with more to come.  Who needs Martians these days!

Reading the book for this second, or was it third, time I was enthralled.  Allowing for the year of its setting, HG’s words took me away to that time and I had trouble putting the book down.  You know; read, put it down for a break, pick it up seconds later just to find out what was happening next. In fact this is a rip roaring good story, Science Fiction at its best.

It starts out quietly with some astronomical movements in a place far away.  Far off in those days anyway.  Over a few days the strings come together with quite an impact and the fun begins.

And like most children’s outside activities, it starts off in the sand pits.

The Earth characters tend to be described in a broad brush manner.  The main character, the narrator doesn’t even have a name. However their characters, their actions, their mental health and their attitude to danger are well scoped.  In fact these human traits seem not to have changed in the hundred years plus since then.

They initially appear to be very naïve.  A nice trait if you can afford it.  I mean vehicles from space land and nothing appears! No ‘hello, here we are for a visit’ or ‘show me to your leader’ or even ‘we are here to wipe you out’!  Just no action at all to start.

Wouldn’t you think, well something is going on here?  No the English people just wander over and take a look in a properly English gentle-person manner. Then it is ‘let’s just sit back away and see what happens’. 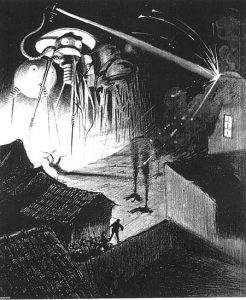 Then all the nightmares in the English experience break loose.

And then things do start happening.  The protagonist, his brother, the butcher, the baker and the candlestick maker all start moving.  Along with the artillery man, the curate and the Martians.  AND of course the narrator (it would be hard to do this without first hand visuals!)

The narrator’s wife is taken to a relative’s house and placed in apparent safety.  After all just how far can a Martian travel?

The Martians, well they are supposed to be an advanced society and maybe they are.  After all they certainly turn out to be very dependent on devices. (Whoops, I forgot they are figments of HG’s imagination!)

With these devices and the English running to and from the vicinity of the Martians, the Martians begin having a field day. So what do the Martians do; they start advancing towards London.  Fortunately for the English the local is limited to the Woking area and on to London. 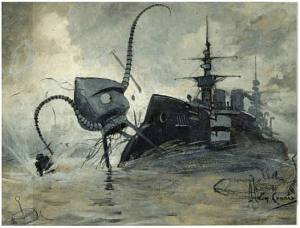 You might find Mother Nature has a big hand in this.

And does the narrator find his wife! Well that’s another thing you will have to find out for yourselves.

War of the Worlds (aka the original media frenzy)

I think most people of my generation and the ones before and just after are very aware of the apparent furore, in New York, caused by a radio play done on Halloween in 1938.  What would we do without Samahain, known as Halloween in the western world.

For some strange reason, one radio station decided to dramatise ‘The War of the Worlds’ on Halloween.  Well if you are going to try spook people what better day to do so.  If someone is at all superstitious, their minds will be far more receptive on the day the boundaries between what is and what isn’t is very thin.

Now the original setting wouldn’t do for a radio broadcast in New York so the setting was changed and somewhat updated (well forty years is forty years) and the tale was loosely a rehash of the original. Imagine what an update to now would entail!  What reactions would occur? It is extremely unlikely to be Martians but maybe Zaphod Beeblebrox and his friends from near Betelgeuse in the region of Orion, the hunter whose arrow fires them to Earth.

Now I must admit the broadcast was done decades before I was born but I have talked to people who did hear it.  Their remembrances were that the play actually didn’t have much of a reaction.  But there again they weren’t from New York or the surrounding environs. 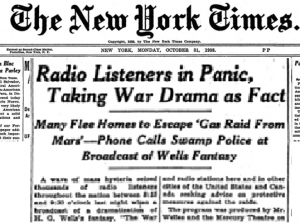 Perhaps in New York it did.  The reaction is unclear though and official records indicate that few people were listening that night.  And this might be reasonably accurate as the drama was done as a newscast.  In those days announcers didn’t feel the need to hear themselves talk and used periods of silence to enhance the atmosphere of the story.  Those that did listen might not have caught all the drama as they un-tuned during these silences.  But if there was a mass reaction with the resulting chaos that was reported, WOW imagine the chaos in the New York of today!

However Orson tried his darndest to make it real, with dramatic pauses and heavy, scared breathing between updates on the aliens’ progress and activities.  I believe this format really annoyed the media as they believed deception was the ploy.

Well that was pretty obvious wasn’t it!

One report noted that since many persons did tune in after the start they might have missed the part at the beginning that noted The War of the Worlds was only a drama.  Certainly an essential point in ensuring mass panic was avoided!

Everyone must admit though that the rumpus made Orson’s fame though!

The War of the World’s Influence on Science 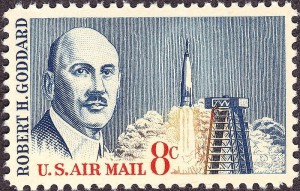 Of this age in time, a teenage boy read the book and became lost in a world of rockets.  As he grew up
and on in age, he became acknowledged by European scientists as an expert in this field.  Reports indicate the Americans ‘pooh poohed’ (now there’s a good English expression for you) his ideas, as what use could rockets possibly be.  It is now acknowledged that his multi-stage rocket and liquid fuel rocket were integral in the journey to develop flight into space.  This young fellow became known as “the founding father of modern rocketry”.

Yet another example of Science Fiction’s impact on ‘real’ science.

Mentioned in the tale are two other harbingers of inventions in later times.  The first being the ‘heat ray’ reminiscent of the future laser.  The second being the ‘black smoke’, the tragic development of chemical warfare faced in World War 1.  Both are items of dismay although the laser has proven beneficial in many usages.

The Metaphor of The War of the Worlds

HG Wells probably didn’t know how much of a metaphor this work would turn out to be. In fact it puts in a nut shell, human characteristics that are still current today.

How would you react to a situation like this?  I think we can safely say that Martians won’t arrive.  But
are we arrogant enough to believe that there is no other beings out there in space who may, or not, arrive one day. 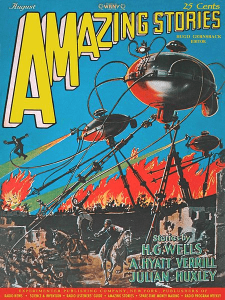 If current reactions are the norm then some will ignore it, some will say ‘nothing will happen to us’.  Let someone else worry about it.  It’s not our fault; our responsibility to fix it.

Will we run around like maniacs, towards danger; away from danger?  Or will some face the problem and if necessary die trying to fix it.

Maybe the arrivals will be friendly.  Can we presume they won’t?  They certainly will be very much more advanced than we are in scientific areas.  Can we hope they are advanced in non-aggressive ones too?

Who living today knows how we will react to who and what they are and do.

I believe you would love this wonderful, calmly exciting book.  Besides being really well written and enjoyable it is not too long and quite easy to read.  One of those books you can pop into when you have a few minutes spare.  You won’t get lost if you put the book down.

I would be very interested in your thoughts and ideas.  And just remember this is Science Fiction not Politics, not Theology.   So I welcome your ideas, comments and discussion so I can gain more ideas into the possibility of meeting new aliens.  (I already have enough old alien friends.  Just ask them!)