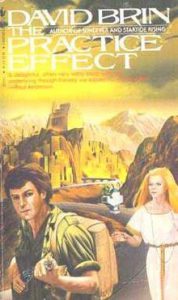 The Practice Effect was my first David Brin book. And I now have many more. That is how much I liked this book.

I was feeling a bit starved for humour the other day. Now this is unusual because I can find humour in most aspects of life. And I will not list them so no one is offended. I do have a bizarre sense of humour!

I pulled out my book list, and wow is it long, and started looking for authors that have written some great, humorous tales. I wanted to see what else they had written.

Then I found a book on the list that had caused me to laugh outrageously out-loudly on its first read through. On a plane mind you!

So does practice make perfect. Read on to get a tantalising snapshot and then get the book to see if this happens.

No it is not a Doctor Who tale but the premise is similar. Instead of the TARDIS “Time and Relative Dimension in Space” we have a Zievatron. This machine has been developed to circumnavigate the need to travel through space in ships and to allow stepping across spacial boundaries. Who needs reality when you are having fun!

The investigation commences without the science professor who worked on the initiation of the time and space machine. He was sidelined by an ambitious competitor. But when things go wrong guess who gets assigned to fix them.

Being and adventuresome, if tunnel visioned young man off he sets through the zievatron. And of course the problem is at the exit end and the mess is extreme and not fixable with the tools he has.

Several service robots were sent through the zievatron prior to this. The ground is covered with robot pieces. What happened? Well the professor set off to find out. And that is where the fun really begins.

Travelling from the zievatron and through the country the world is definitely a rural most likely primitive one. Civilisation slowly comes into view as the days pass and the professor acclimatises. Or does he?

Now the one thing you notice when you read this tale is the age of the story and therefore the nuances of the time. Be prepared to feel it is a bit dated by speech and actions. But do read on as the humour is very much still there.

Confusion starts rearing its ugly head as contradictions appear. So much is primitive but some things would go down exceptionally well back on earth. For instance no wheels but carts run on rails that are lubricated by the best oil the professor has ever seen. Transport however isn’t that fast though.

The professor never is aware of issues around him and starts stopping progress as he gets in the way of daily activities and is finally put in his place by local officials. While in place he starts discovering the practice effect, how it works and how much it tangles up the lives of various people.

Then there is what happens when the practising slows down or disappears. No wonder the selected practisers get exhausted and have such bedraggled personal gear.

Well that’s all I am saying on this as I don’t want to let the story out of the bag.

WHAT HAPPENS IF PRACTISING STOPS? 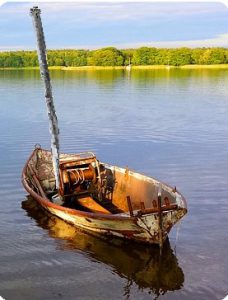 From this point humorous chaos exists. And it should have you rolling in the aisles. Or at least having a loud chuckle.

I recommend this tale to anyone who loves a good laugh, doesn’t mind laughing out loud in company and has a great imagination.

You can find this in eBook at Kobo and normal book form at Booktopia.