Who are the dogs of fantasy?

As I noted in my post ‘Magic Cats’ I am now going to even the books by exploring several of my favourite books with dogs in fantasy books proponents.

Elizabeth Moon’s fast moving series of books, the Vatta Wars, includes one of the most effective Jack Russell terriers in future history. After all, in these books where the family fortunes are devastated by unsavoury persons, who is it that saves the day.

Most readers will probably think it’s one or all of the three main characters; Ky, Stella and Aunt Grace. However I believe that this little male dog is the main saviour of the day, doing what male dogs do naturally. 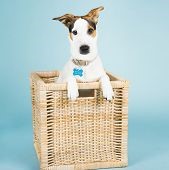 Rascal, the pup found dumped in a space station garbage bin, actually doesn’t perform naturally as he is in danger of being kidnapped by a dog loving population. His sperm count shows he has great potential in producing new blood into the offspring of the inbred reproducing females. So to AI (Artificial Insemination) – humans can be such spoil sports!

And the money to be made from his sperm is astronomical.  This money producing activity quick starts the saving of the Vatta’s trading empire.

Rascal is also a typical naughty pup, getting into things he shouldn’t but somehow ending up doing the right thing.

Jim is the author of the Dresden Files. Harry Dresden is the only wizard in the phone book.

These books are a very popular series.  In fact so popular that someone just had to change it when producing the film series.

If you like your stories to have consistency then read the books before obtaining the DVD. At least one character is so changed as to be basically unrecognisable to the written one. And the setting and props just don’t work as well.

Also your imagination has more range in the written book and Mouse can be created in your image of him.

Several books in, Blood Rites, Harry Dresden rescues a pile of puppy pooches. After a series of mishaps the pile is returned to the owner with the exception of one, either very brave or somewhat stupid, pup. Note that Harry didn’t plan this – the pup did!

Events transpire that show the dog, as pup and adult, is not stupid at all. The dog’s behaviour indicates that he is one of the empathic dogs in fantasy.

And to Harry’s consternation, the pup grows into a significantly massive adult! 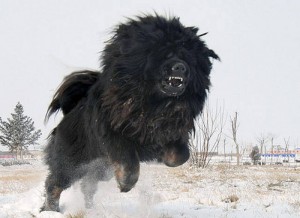 In Blood Rites and future books Mouse proves to be all a wizard needs. He is steadfast and intelligent. He is fast enough to run down enemies and fight them to a standstill. With Harry around all these traits prove to be very necessary for this dog.

Fortunately Mouse has great hearing and heals quickly. His empathic qualities allow him to influence people for their safety. Mouse appears to be based on a Foo dog and a mortal canine. Since a Foo dog is in celestial terminology a lion I don’t think this cross would be possible elsewhere!

And finally for now

My reviews will be to tantalise you.  They will not try to influence your idea of what the overall books will be and where they might lead you.  I read for enjoyment and leisure not for deep, meaningful enlightenment.  If you do get some illumination or guidance while reading them, that to me is a good bonus.

Jim Butcher’s Mouse certainly adds enjoyment and interest to the books, so as with Elizabeth Moon’s Rascal that is all I am saying so go and read the books!

Many science fiction and fantasy books have creatures that appeal to different people.

To find a good assortment books containing real and imaginary non-human characters please check out Amazon.  And for we Australians and other earth citizens the landing page in Booktopia  show the Vatta series with Marque and Reprisal included while down under (and in the UK) this book was published as Moving Target.

I also welcome you comments on this site as it will always be a work in progress.