From the Mists of Fairy 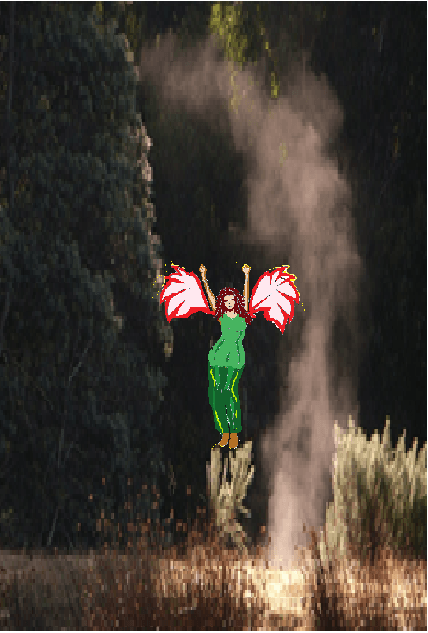 I am going to tell you a tale of the dark fairyland.  It’s a place not so very different from its parallel location companion of Earth.

The protagonist is in fact a man of earth with no apparent goal in life and appears to go with the line of least resistance. He is a man of mists with no solid form in life.  His name is Theo.

He is a hard character to warm to as he is so frustrating in his drifting from one non-event, from one tragedy to another.  He seems to be in a world defined by no know words.

As often happens with this type of person life hands out hard knocks to him in the form of severely bad luck occurring to his family and friends.

Finally after escaping from his rut and heading (most likely) to a new place away from the city he is likely to fall into the same old, same old.  However something happens.  Is it good or is it bad.  With his ongoing life what do you think!

The land of fairy folk

Theo enters the land of fairy folk in a true escapist fashion, through a portal in the air created by someone else, one of the folk, a sprite, named Applecore.  The escape was in the old nick of time manner to escape a creature of the very deep dark sent to fetch Theo to fairy.

Applecore is a tough woman.  Hard speaking, taking no nonsense from anyone or ‘thing’ and of particular smallness of size.  She turned out to be a companion of gold.  Although she fit in Theo’s hand she often took his in hers (figuratively of course) and pulled him along.

The way to the flowers and their plotting was fraught with danger, from land, sky and water.  Mostly land and water until the big holocaust in the City.

And from the first treachery was encountered and death beckoned.

The City of the Folk

Theo had unknowingly been informed of this setting, reading of it from a journal made by his great uncle.  He had thought it a fairy tale.  How true that was.

His feeling of disbelieve with the overwhelming setting was hard to shake even though it seemed almost but not quite like his other dimension.

The majority of ‘citizens’ of the City were under the thumb of the Flower clans. Those that weren’t were in their employ as guards and general bullies.  And the Flowers were after Theo.  But why he kept asking.

There are various nasties throughout the tale who try their hardest to hurt others.

Along the way Theo picked up a (very) few more friends; Poppy who ends up being quite close to Theo; Button the thoughtful and mesmerising goblin;  Cumber Sedge a fairy mother arranged the surgical (yes this fairy was reasonably modern) removal of his wings so he would fit in with the upper crust.

Others drifted by and momentarily impacted on Theo’s life.

But a coup d’état was in the air and the main weapon came from the air.  The fairy equivalent of a fire storm. One faction of Flowers was set to malevolently take over.

Amid the furious hunt for Theo a quiet revolution is underway led by the magnetic Button who has his own path to set things right in Fairy.

Following the fire maelstrom Theo and Cumber find their way to the revolutionary group.  Applecore has apparently been lost. And needs to be found.  Finally Theo makes a positive if potentially unfruitful move of his own.

Captured finally, Theo uses his brains (also finally) and stops the threat Fairy presents to the world he grew up in with quite a clever strategy.  (No I am not going to tell you.  I never want to ruin a good story.)

And Theo is in fact saved by a very unlikely source.  Unlike a lot of modern fairy tales this was definitely not a given.

Happily Ever After – Who Knows?

The tale’s end does have another twist that is probably so obvious very few seem to recognise it.  (And again that is for you to find out.)

The end as given hints at continuing stories and more endings but these may only arise in your imaginations.

This was my second read of the book so I was aware of the sedate pace of it.  In my opinion Tad Williams, the Author, did this on purpose.  The readers are drawn in and just as the slow pace became obvious something happened to make them keep reading.

A good ploy to build up to a climax.  And as to what happens everyone treads through the story in almost perpetual confusion as things apparently happen out of thin air.  (How like Fairy!)

I have also read many reviews of ‘The War of the Flowers” and no matter what the overall impression is there is a train of good things through them.  Mostly these are very positive but do note the slow, laid back speed.

But life, no matter where you are, is usually like this.  Either it is too fast or too slow

I welcome your comments, opinions or suggestions on this article and look forward to responding to them.

Do you have any questions?  Just ask – I don’t know if I can answer all of them but I can certainly try to find the answers.