Delving into the red hot steampunk world for the first time, in a semi-serious manner, I believe the best and most fun bit are the offshoots of the steampunk tales. There has been an explosion of ‘stuff’ to accompany the tales. And the inventiveness is fantastic. 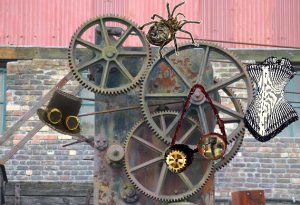 For me this dress up sort of thing, except for those parties where you can never think of a costume, started in Sydney, Australia. A bunch of us decided to go and see the ‘Rocky Horror Picture Show’ starring many Aussie actors who became the greats of the Australian acting scene. This included Reg Livermore playing Frank-N- Furter who was “just a sweet transvestite from Transsexual, Transylvania“.

The theatre was old and dilapidated and it seemed that it had been made especially for this musical. It looked like a demolition site but that gave it great atmosphere.

There were bodies on the floor, bodies suspended from above, the ushers were pretty ugly and rats scurried around. By the way only the rats were real! And guess what, so many people dressed the part for this engrossing musical play that the audience really became part of the story.

In fact the theatre was a perfect site for some very strange aliens.

Now this has nothing to do with steampunk, unless there was mechanical steam power carrying these aliens to and from earth. But it did show the power of a good thing rolling into everyone getting involved and having fun in huge quantities.

Steampunk has grown in many ways into a really fun, exciting and interactive party. Quite often the gear, gadgets and gizmos have little to do with steam or punk. However the structure of them certainly allows the imagination to visualise power provided by steam if power is necessary.

The fun party is a huge venue for imaginative people to go massively over the top in a friendly, Victorian (or Western or other worldly) and very mechanical way. Steam is optional. In fact the time in history, dimension and/or space can be pretty arbitrary too!

So let the imagination wander, the costume gear be created and the fun begin. What are these mythical gadgets, gizmos and gears (with their often fantastical accompanying cogs)?

And if you haven’t the energy to steampunk it physically you can sit down with a colourful book with a steampunk theme.

Briefly, there is men’s stuff and women’s things (or for Frank–N-Furter and Rocky things from either selection). Children can go wild with Victorian wear, at Willy Wonka parties, or Halloween for that matter. The Victorian children’s wear gives a great range of fashion; from child labour right through to the ‘elegant’ nobility.

And pets, I never imagined steampunk attire for pets but there you go. Some amazing things happen – there is even gear for ferrets! You can make all sorts of ‘steampunk furniture. Beds from tubular scaffold parts. Desks from old armed forces mines. (Unarmed of course!) 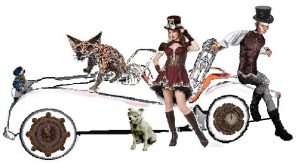 Then there are toys and sculptures made from old gears and cogs. And gadgets that might work and perform some unknown action but at least you can remember their names. Or those other things, gizmos. The gadgets you can’t remember the name of.

Whatever it is, boy will you find laughter and delight and sometimes frustration in making these. Then you can delight in them and find excitement in using them.If you can find old gears to collect, add to them bags of new gears and make jewellery. Add chains, add odd bits of metal add anything that hints of the old mechanical age. Modernise it if you must but keep the integrity of steampunk.

The sky and your imagination is the limit.

We more mature children have a great choice of gear, mostly based on Victorian dress. (Mature children; now that is an oxymoron if I ever heard one!) Go out and rage my older friends. Steampunk gear is made for you even though none of us is old enough to have experienced the actual Victorian Life. However we most likely have seen many family photos that give us a pretty good idea.

Steampunk gear is often souped-up with an astonishing range of embellishments. 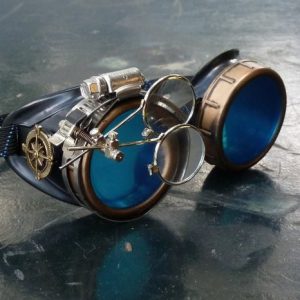 We find hats and gloves; things to hold both you and your trousers up; suitable footwear, neck wear, spectacles and goggles; things of metal and glass, gears and springs; and you can make your face hairier too.We can also find lots of deviant style steampunk objects that titivate our senses; sculptures and loads of different clocks, barometers, house interior fittings such as light switch covers and toilet paper roll holders. Keep it up and you will forget what age you are living in! 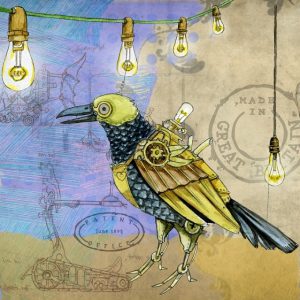 And there is also animal steampunk gear. I do not know how some of these constructions are placed on the feral or pet animals but again that is for the imagination. Or like some costumers you could just build or draw the beastie and pretend it is real.

Besides I believe animals should live free. No pretensions and no costumes.

Well there you have a small glimpse of the fantastic world of steampunk.

You can dress up to your heart’s content. Find wonderful and wacky objects d’ art to gaze at and imagine grand stories around them. Project yourself outwards into a new but old world.

And to do this there are people to provide for you. One place that has a reasonable selection of steampunk costumes and ancillaries is Amazon.

If you have found any further interesting stuff about steampunk I would be delighted to hear about it. If so please leave a comment so I can talk to you about it.