What really Happens Under London? 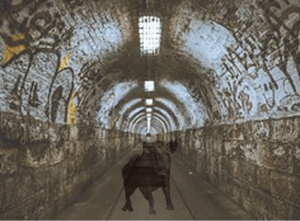 Hi folks, are you looking for suggestions of tales to read or to listen to?  I was looking for a new author and book (new to me anyway) to read and found Neverwhere, by Neil Gaiman, everywhere mentioned.  And it appeared that most people rated it very highly in the Urban Fantasy theme.  OK, nothing ventured nothing gained so I enthusiastically searched the book down.

After reading it I felt that you fantasy buffs, at least those that hadn’t discovered it yet, would love it. (Or I am pretty sure you would really like it!) It not only is Urban Fantasy. It has a definite taste of Dark Fantasy in it.

For me the book started quietly, gently and somewhat frustratingly; slowly building the main character up to familiarity.  Frustratingly because this character was annoyingly spineless.  And then the stirring up of his character started until my interest was firmly caught and I couldn’t put the book down.

Enter Richard, an unassuming character from Scotland, just about to travel south and start a career in London.  Richard is an apparently unassertive person with a nondescript mien and currently drifting through life.  He appears content to be the companion of a lady determined to mould him into her ideal image.

During these first pages I was wondering if the novel was going anywhere (pun intended) as Richard was decidedly wearisome.  I decided that Richard had never had an exciting event in his life and was quite content to drift in the wake of his fiancé.  How dreadfully boring.

This was in fact a good basis for what came next because as is said ‘when the going gets tough the wishy washy get going’!

The Unexpected Door aka it Starts with Doors 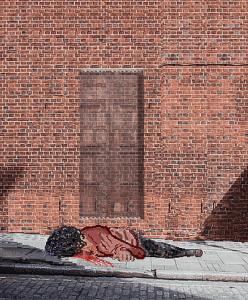 While accompanying his controlling other half on the walk to a restaurant to impress her boss, a body materialised in front of them as if from a door from somewhere else. (As it turned out it did!)

The body turns out to be young woman exhausted and hurt with her blood very obviously showing.
The fiancé appears to be oblivious to this person as if it is almost a figment of her imagination.  So she walks on without Richard and apparently out on Richard.  Her ultimatum.

The hero starts emerging, albeit slowly.  Richard helps this young lady back to his digs and the exploration and growth of his personality begins.

The unexpected Door has miraculous healing ability and recovers a great deal by the following day.

Richard, becoming the chivalrous knight, asks if he can help her and, imagine that, yes he can.  He can go and find the mysterious Marquis de Carabas. Well contrary to initial impressions of Richard, he enters ‘London Below’ and does just that.  Brings the Marquis back and, hey presto, both the Marguis and Door vanish.

And at this point Richard becomes unnoticed in his ‘normal’ world. He passes unseen and it is almost as if he never existed.  It is only if people really focus that they get an impression of someone there.  I think this would be a very helpful trait with respect to some parts of life. However it would be extremely frustrating if it couldn’t be controlled so that it only happened when one wanted it to.

And the most worrying aspect is that his finances are also out of his reach and cabs ignore him.  Yow!

Now Richard quickly gets tired of being figuratively non-existent so with great fortitude decides to do something about his problem. By a series of deductions he manages to get back to London Below to seek out Door and find out what the heck is going on.

And if he thinks things have been odd up until now he is in for a big shock. 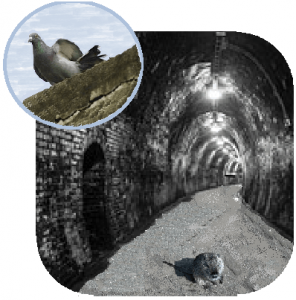 His initial contact is a tramp, Old Bailey, who takes him through the portal to a group called the Rat-Speakers. Yes they really do talk to rats.  Unbeknownst to Richard at that point is the fact he met the King Rat when Door was at his flat.  His initial action when introduced to the Rat-Speakers is to try kill the actual rat that appeared soon after.  Not a very wise move as the Rat-Speakers actually serve the rats. The rat rewarded him with a look of great distain!

His first challenge is a very dark one on the Nights Bridge crossing to the Floating Market. Wandering through the stalls of diverse items including guaranteed junk, odd foods and an assortment of magic and information.  By the sound of it a very interesting market – just my style.  At markets I always head straight for the junk stalls.

Wandering through this market he again finds Door.

We have already met Door and the Marquis in London Above. We just don’t know much about them yet.

At the transition point of Above and Below we have Old Bailey. Now I have a couple of ideas on this play on words, with the “welfare of the people is supreme” leading the way.  The homeless and downtrodden appear to be overlooked in spite of this engraving on the wall of the Central Criminal Court in London (The Old Bailey). Old Bailey’s companions are pigeons, rooks and starlings; where the pigeons are often messengers (and the others are food!). OB and the Marquis have quite an odd connection as you will find out when you continue on with the adventure.

Another twist are the afore mentioned Rats and Rat-Speakers. Here Rats rule! The Rats are king and the Rat Speakers venerate and serve them. I know rats are very intelligent beings but to allow humans to serve them may actually indicate they aren’t so smart after all!

As the journey progresses the cast increases.  Obviously Door, as the only surviving member of her family, is still in danger and needs a body guard.  A lengthy audition takes place and Hunter is introduced and basically thrashes the opposition winning the part. 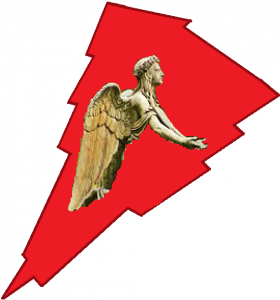 to be a contradictory member of the cast.  (Read the book or watch the TV series and you will find out why.)

As per almost a hundred percent of this type of adventure, there several really bad guys. Namely two thugs, assassins, cannibals and generally all around nasties named Mr Croup and Vandemar.  As for their crimes wow, what an imagination Neil has!

The mysterious Angel with the hidden agenda, perhaps you will find this out.

The Earl lives in the “Tardis” of Neverwhere’s trains; the carriage’s inside is bigger than the outside.  Well why not.  You get first class service and can travel anywhere.  Yes, this train seems to have no set travel plan. And in here he holds his Court.

The Great Beast of London initially features in Richard’s nightmare dreams.  Is it real?  You can find out for yourself.

The birds are the medley characters with many functions. They appear in the floating market as goods; they carry messages and they are eaten (raw mostly)!

Finally there are an assortment of miscellaneous characters that incorporate the characteristics of many fantasy inhabitants.  They drain energy, cause fear and are generally nice all-round irritants.

Thank goodness for the London Underground tunnels for the sewers and train network.  As per a good Urban Fantasy the scene is set down in these. Dark and dingy basements and old buildings but remarkably dry in most places (for sewers anyway) – just dark and fusty. 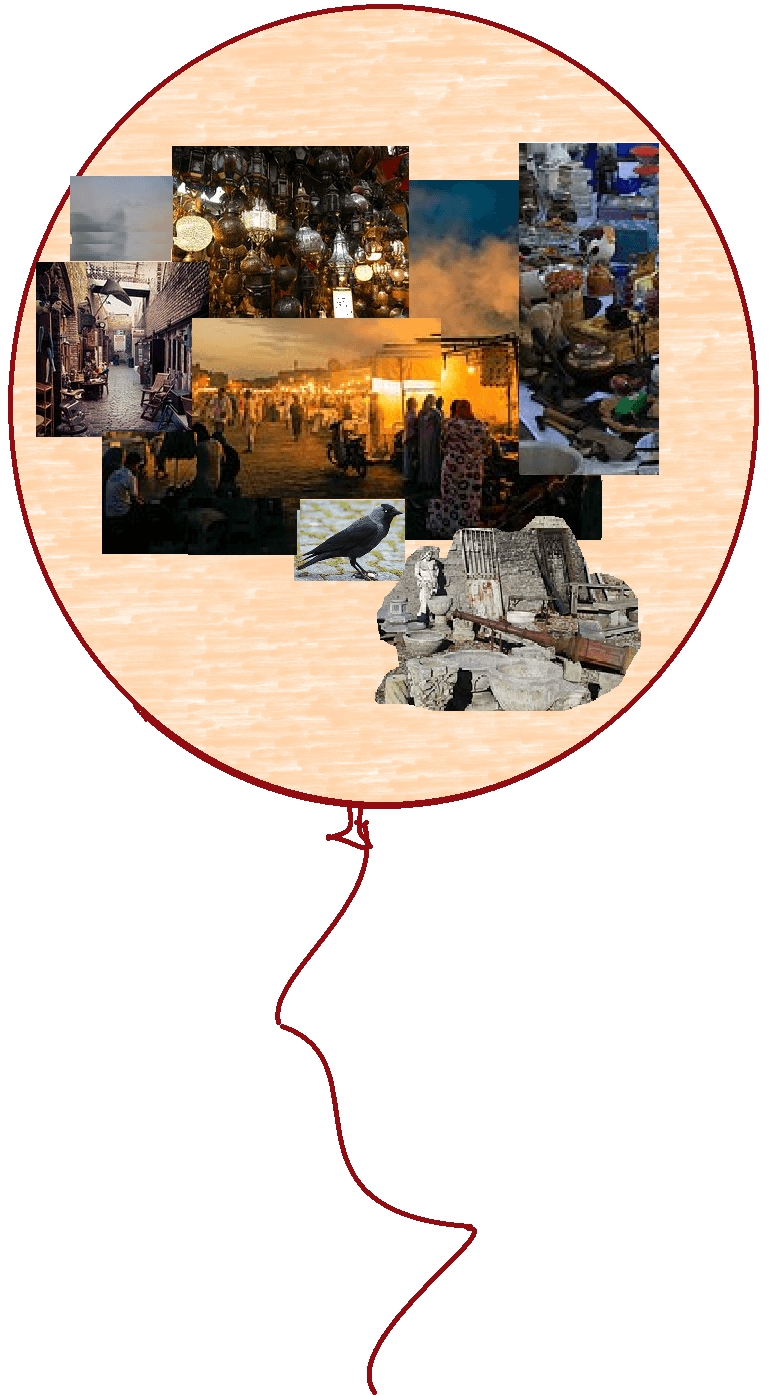 The wonderful naming of places in Neverwhere’s London Below is almost a continual set of puns.

We have Night’s Bridge (well I expect it is very dark when you fall into the “cracks below London” and this bridge is really dark).

Then there is Earl’s Court (but not the way you know it)!   Well maybe in the old days when Earls Court was home to the world’s backpacking travellers.  The real one does bear a clear similarity to Neverwhere’s for entertainment but now it is posh, expensive (but still very entertaining).

And Islington that includes Angel. (And boy is that a fact.)

Black Friars and it’s really the Order of Monks under London in Neverwhere and Ordeals are required.

The British Museum a stately building. What an unusual strategic point and key.  Ironically an exhibition of Angels, arranged by Richard’s ex manipulative fiancé, is taking place there. And she still can only just vaguely make him out. And what do you find at the museum.  Go and find out!

And the first Floating Market Richard enters is in Harrods of all places! Mind you the eclectic assortment of useless and perhaps some non-useless goods is still there but quite downgraded from Harrods of today. And there is a collection of very strange and most likely indigestible live food stuff.

And even the non-living present problems to Richard as he finds the gaps at platform edges are alive and eat creatures that are foolish enough to get too close!

Richard’s progress from Scotland to Neverwhere is one of soul and character building.  Originally he is a fairly wishy washy person, with no practical concepts or imagination.  He appears slow witted and forgetful, exhibited by his need to repeat everything said to him (and isn’t that annoying).

Obedient (or so he acts unless his forgetfulness comes into play) to his fiancé Richard slowly starts to go through a complete emancipation.

He endures hardship, anonymity and ridicule. Really this does display, in part, what happens to many of us.

He suffers a particular nightmare but finally encircles it.  You might say he has a complete personality overhaul.

And finally he returns to London above, where he finds life really quite boring.  (Probably because when he previously lived there he was so boring!)

So what happens next?  Is this the end? 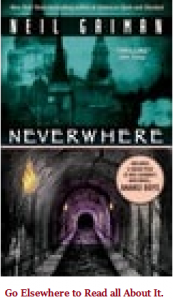 Now I have skimmed the melody of this fantastic Urban Fantasy tale so now it is time for you to add to your idea of what happens.

Does Neverwhere become Richard’s Somewhere where he is a creature of stature? Does living in the darkened places appeal more than London!

And to find out the answers to all the questions that you find arise, Neverworld can be read or watched and listened to at your leisure.

When you do I would welcome your input so come back to me here and let me know what you felt as you followed Richard’s path.