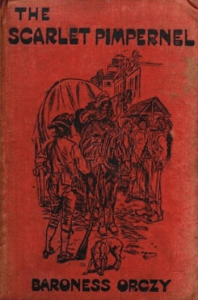 The Scarlet Pimpernel at Booktopia

I started watching the Scarlet Pimpernel TV series in the late 1950s before I ever read the book.  It was a very exciting, nail biting experience and when, during the day the call went out It’s the Scarlet Pimpernel, we children all gathered in someone’s house to watch the action.  We rousingly cheered on the good guys and booed the baddies.

Before our eyes the first modern superhero, the Scarlet Pimpernel, carried out escapades with great daring-do.  Snatching up the oppressed and sneaking them out of France right under the officials’ noses.  At that age we hadn’t heard about the French Revolution.  That was for later years at school.

We play acted out the stories and while researching this superhero I finally realised where my common exclamation of ‘zooks’ (gadzooks) came from!  I still use this frequently 50 years later.

The story was set during the French Revolution that occurred in the eighteenth century. The play and subsequent novel was written in the early twentieth century.

Ms Orczy must have done some heroic research herself as, from all accounts, The Scarlet Pimpernel closely mirrors history.  Many characters are based on actual people.

The baroness was a Hungarian painter and writer.  Her writing, mainly based on this “most famous” character and his distant predecessors and friends, lives on and is still recreated in modern musicals and on modern media such as film and TV.  The books are still in publication.  Not bad for a writer of yesteryear!

The prose, originally written as a play, is written in surprisingly modern language.  When adapted for the stage play in 1905 it was a massive hit in Britain.

The superhero is represented in the “foppish foolish” manner PG Wodehouse portrays his Bertie Wooster.  The image is one portrayal that seems to resist changing to the real character of the British.  Or is it in fact still relevant?

It’s been a long time since I read the book (I am certainly ready for a full re-read) but the defining goal was to save the crown prince (Dauphine) of France. 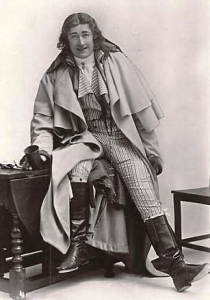 Although he shouldn’t be revealed yet, Sir Percy Blakeney masquerades as a typical popinjay of society.  In fact he is the (just) invincible superhero “with a secret identity”.

In his adventures he accomplishes this with the various ruses.  You might like to read the book to find his resume of ruses.  Some were pretty devious!

In real life the Dauphine died in prison.  Unlike his parents he escaped Madame la Guillotine.

In the process of rescuing Louis, many other feats and accompanying disguises were accomplished in the saving of persecuted and “unjustly convicted” gentry and their commoner helpers.

My interpretation of the gentry is that they were so embedded in the strata of the noble their excessiveness that down trod the masses was normal to them.

There were actually quite a few arch villains in the tales of the Scarlet Pimpernel.

The stickiest, most persistent arch villain was the always blackly clad Chauvelin, a crafty character, who was the French ambassador to England.

He was also penned as a member of the group who actually instigated the storming “of the Bastille” and the committees who virtually dictated the rule of France, a powerful despotic group of men.  (Sorry women but we were only able to influence through the men.)

The ‘Bastille’ initiated the French Revolution and the committees enforced the rules of the dictators.  These rules only favoured those who ruled and tramped over everyone else.

Modern media has softened Chauvelin’s character somewhat.  The fact is that he was an outright villain and cared only for himself no matter the impact on others.  Modernising to political correctness is so annoying sometimes.

I think the best ruse the Pimpernel used with Chauvelin was his use of ‘pepper spray’ via means of disguised snuff.  Up the old snoz and a huge blinding sneezing fit.  And in the confusion he foils the guards again.

The League of the Scarlet Pimpernel 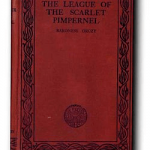 As with most superheroes there was a strong support cast.  The league itself was comprised of twenty nobles who regularly stepped outside their comfort zone during the act of rescue.  It was supported by the brave hearted, altruistic commoners who helped them along the rescue route.

The start of the climatic ending was the finding of a letter during a surprise attack on members of the league.  As the letter was from Sir Percy’s wife’s brother, Chauvelin (the really bad guy) set out to blackmail her, the scarlet woman, into revealing the Scarlet Pimpernel.  At that time she had no idea who he was.

I think most stories written when this was had an actress or singer or such influencing the story line and adventurer, in this case the lovely Marguerite St. Just.  She represents a good twist to the heroine character with strong ties to the baddies, albeit not with the intention of harming the hero.

Marguerite is denounced by one of the saved gentry thus beginning the cool attitude exhibited towards her by Sir Percy.

Accidentally she discovers his identity and sets out to save her husband leaving her poor brother to fend for himself. 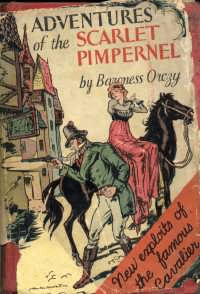 After much misadventure, the disguised Pimpernel is severely beaten.  The rescuing the rescuer Marguerite is totally exhausted and worn to unconsciousness (swooning I believe).

Although proving to be a tenacious heroine, the portrayal of the helpless female shows in the final scenes.

But love overcomes all in the style of the true historical romance.

And during the process of rescue and making up, and finishing the adventure the villain is banned from England.

Is there any Scarlet Pimpernel questions, insights or anecdotes out there? If you have any I would really like you to let me know.  I will read them and exchange more comments with you in response or answer.