Are Legends, Myths, Fairy Tales and Fables for Children?

Did the wolf eat grandma?  What do you lovely people think? I can’t imagine that a wolf big enough to swallow a person whole existed after the time of humanities entrance to the earth stage. Nor a person who would survive this.

On the other hand I never have heard of a wolf who could cut a person in little pieces, cook the pieces in a stew and then share them with a child for dinner.

Imagine ‘The Emperor’s New Clothes’ starting a new fad.  Will I or won’t I go clad into the palace halls!  That could certainly leave little to the imagination.  You couldn’t hide many state secrets there.

What we have come to know as fairy tales, myths, fables and legends were originally folk’s tales told by word of mouth down through the generations.  They were not classified as these topics, they just were.

These literary themes that evolved from the folklore of all countries are familiar to all of us.

The tales were told by and to adults most likely around camp fires.  These early adults appear to have told them to their children to frighten them into doing what they were told!

Actually as many of you know, not only the children were frightened. What about the disappearing children of Hamlet.  That would certainly frighten the adults (or most of them anyway)! 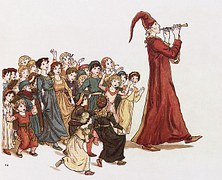 The Source of Folklore

The tales I grew up with are generally based on stories handed down from European sources.  However there is a wealth of ‘folk’ beliefs in every nation.  Generally there is a similar tale told throughout most cultures with only the names and places changed (to protect the innocent (?) – not likely with the original tales).  This would indicate that the folk tales were based on similar aspects of daily life.

Now the early peoples of earth believed in these fairy tales, legends, fables and myths.  Are we so different?  We may not believe in these but we do have people who predict our future, who ‘find’ lost things, who believe in invisible others, in miracles and so forth and cynics who really don’t believe in anything that is not right in front of them.

And who are we to say different.  Even the most cynical often have occurrences in their lives that are difficult to explain.  On the other hand we should not be too gullible.

What are fairy tales, myths, fables and legends? 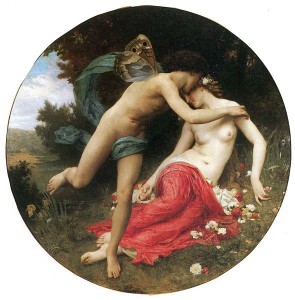 Zephyrus, the Greek god of the west wind and the goddess Chloris, from an 1875 oil painting by William-Adolphe Bouguereau

Briefly (and this is my summary only):

Fairy tales revolve around beings with and often without mystical powers in a time some when.  Often fairy tales contain no fairies at all for example the original ‘fairy tales’ of Puss in Boots and Little Red Riding Hood.  The puss talks, the west wind talks (and looks pretty human with some human traits!) and once you’re dead, death is not a given!

There is a bit of a theme through most fairy tales.  The main character/s live in some form of deprivation.  There is always a bad guy (in the Canadian sense guy is gender neutral!). Sometimes there is other good and/or just average guys.

Myths are stories where nature is explained by human created gods and heroes that achieve great feats and become demigods in the afterlife.  Myths often gain a realistic appearance and may have arisen from actual people or events.

Fables are generally moral lessons portrayed by a variety of living and mythical things that are portrayed with human abilities.  They are used to portray how one should proceed through life and how they should or shouldn’t treat others.

There appears to be no real consensus on the intricate path from the past to the present.  Somewhere along the way these tales started to be written down.  And they continued to be aimed at adults.  These adults passed on the stories to their children as examples or teachings.  The children remembered these powerful messages as they grew into adults.  The tales of those days would have terrified many of us as children today.  (And adults today worry about the content of modern literature and media!)

Along the way the named branches of fairy tales, myths, fables and legends emerged.

Evolution into the Written Word

In the seventeenth century and on into the very early eighteen century two people were instrumental in the evolution of the ‘modern’ day fairy tale.   Charles Perrault is credited with the founding of the modern fairy tale in spite of Elisabeth Jerichau-Baumann beating him by years.  It was totally a male oriented world in those days.  Elizabeth is credited with coining the name.

Later on in the nineteenth century the Grimm brothers followed. The two Grimm brothers started collecting German folklore into volumes known as Grimm’s Fairy Tales.  Initially these books should have carried a ‘Not for Children’ warning. The tales told were really gruesome.  Many of these tales would be restricted today.  Originally many of humanities vices were
involved in this folklore.

Children were abused, children and adults raped and lots of people were burned or cannibalised.

Taming of the Tale

As they travelled forward in time they adapted to the ways and needs of the times.  Initially these tales were pretty dark and scary.  They seemed to be meant to teach children to fear the unknown.

Very few (if any of them) bore much resemblance to what we know of these today.  The happy ever after tales of our childhood.  The cutesy films of Disney.  Don’t get me wrong as I did go to most of the animated Disney films as a child and one of my all-time favourites is Fantasia. 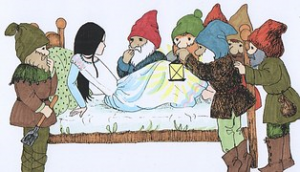 For some reason the Grimms started moderating their work more to suit children.  Even then they were still gruesome.  The later editions turned the blatant unhealthy sex scenes to sex by insinuation.

At the same time, the violence grew.  For example Snow White’s queen is forced to dance in red hot iron shoes.

But did Snow White come out all right with her seven dwarfs!

Charles Perrault in his fabulous tale of Cinderella had the stepsisters cut off parts of their feet to fit the slipper.

In the early half of the nineteenth century Hans Christian Anderson started creating mostly original fairy tales including the Emperor’s New Clothes.  Often these contained some element of ridicule.

A Trace of Reality

Snow White is based on a real life tragedy.  The dwarfs were children used in the copper mines who became very deformed.  Hansel and Gretel may also be based on fact.  Even Cinderella might have been related to a Greek maiden who went through her history as a commodity ending up in a Pharaoh’s harem.

Fairy tales are often parodied as in the Fractured Fairy Tales featured on the classic Rocky and Bullwinkle TV show.  As a child I watched every episode of this.  These tales were often much more interesting than straight fairy tales.

A number of tales were ‘rearranged’ as parodies by James Finn Garner as several books and finally as an omnibus named Politically Correct, the Ultimate Storybook. I haven’t found a copy yet but am going to do a thorough search for one.

Over the last century the invention of a fairy tale mythology has become a growing thread of fantasy
fiction.  Woven with this thread are fairy and myth traditional characteristics and newly created lore.

Along the way the normal short story format was extended until nowadays the work appears as a fantasy  novel.  Instead of a collection of folklore from a vast distance in the past the created myths are quickly written into a work of fantasy fiction for today’s readers. Good examples of this are Tolkien’s Hobbit and Tad Williams ‘War of the Flowers” (a dark fairy tale).

Today both science fiction and fantasy have grown from a trickle to a flood.

A prolific writer of mythic fiction is Charles de Lint.  In his story line he mingles modern and traditional characters within a parallel mythological pattern.  The pattern often includes Coyote and Raven, notorious tricksters of many of North America’s indigenous people.

Everyone of all ages and all walks of life should have been exposed to folklore.  Either parents read to them in childhood or they progressed to reading fairy tales, legends, fables and myths for themselves.  And then they read them to their children and children’s children.

So the never ending circle goes on.

I would certainly recommend that you dip into the wonder of fairy tales as often and randomly as you can to provide nostalgia from your past and delight for now.  These tales can be found in several formats.

There are still many published in book form, in novels, short stories and comics.  There are colouring books where you can colour them to your imagination. And I bet your vivid imagination is different to mine.  It would be fun to compare this art.  If, like me, you enjoy reminiscing, or are still a child at heart you can learn about the Fairy Tale Geneology from ‘the Gictorian Press and the Fairy Tale’.  You can find this at Bookoutlet.

We now have audio books where it is great to sit back, close your eyes, enjoy the story and most likely fall asleep and dream.

There are eReaders make reading a different experience when you are out and about and need a break or when you are travelling.

And if you don’t want to expend the effort in reading go to the movies or bring home DVDs to watch at your leisure.

Please comment on my site and recommend any of these type of tales that you like or I have missed.