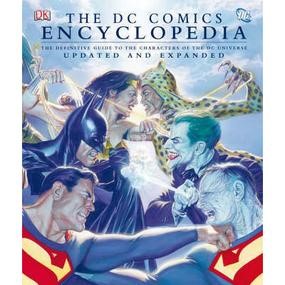 I can’t remember when I was introduced to comic books and their damn fine superheroes.  Probably when our family moved back to the so called civilised world.  Prior to this we lived in the Ghana Gold Coast where I went indigenous.  Boy they spoiled their children and apparently I lapped it up. It’s a shame I was way too young to appreciate the traditional folklore of the Ghanaians as it would have been amazing.

Then we moved back to London to await the finalisation of my mum and dad’s immigration to Canada.

Then in British Columbia we moved way up north (where transport was by bush plane or barge).  The snow was thick and the winter long.  We children played games featuring our own version of superheroes.  These were usually played by the bigger kids because – they could! 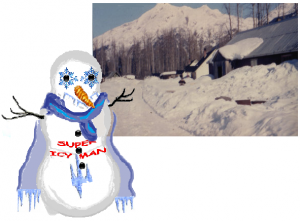 Then south to a lovely place half way up a mountain.  Finally we ended up east in the middle of several sets of mountain ranges.  By the time I was six I had lived in four countries.

In retrospect, I think any or all of these magical places would be a good setting for a ‘Superhero’.  In fact many people in these areas did superhero acts and without super powers.  They saved lives, helped people in trouble and protected them from adverse experiences.  All these amplified are shown in the Superhero fantasy characters that have evolved over the years.

I believe I was between four and six when I ‘found’ comic books.  At that time we were in an almost civilised mining camp where my father worked.  Since we could drive to the stores we could buy a new comic every week.  Way up north stock only came in infrequently so this was a new luxury to us.

All the kids in the camp had piles of comics including many superhero ones.  Presumably they were forerunners to the Marvel and DC comics we know today, but we paid no attention to the publisher.  At the time we were young and only interested in the latest instalment of excitement.

Due to the transferring of our parents around the province to different camps we kids grew to know lots of other kids and frequently bumped into ones from other places we had lived.  So comic book sharing was an absolute.  And a real plus was the huge amount of socialising we children obtained. 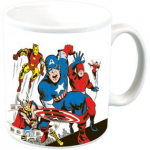 The stories of superheroes often if not always came as cliff hangers as these were the days of the  superhero cliffhangers.  The story line was do they live and save the day or do they die at the hand of their nemesis villains? We didn’t just have to wait for the next instalment to see how the hero was saved or the villain escaped (or was dealt with).   We had to wait until that comic book was traded into our hands and that could take a while.

The great thing was that there was always something to read, even if it was a re-read done while waiting on a comic with the final (not usually) outcome.  Final outcomes often turned into another dazzling cliff hanger and so on.  And if reading material was rare we would pull out the colouring books and go to town inventing our own colour combinations.

Both super villains and super heroes died and were miraculously restored in future comics.  No one questioned this because no one really carried about trivial things such as truth in comics!

As Time Goes By

The initial introduction of superheroes to the western world was in 1867 in England. This was followed almost 40 years later by the rescuing, masked avenger the Scarlet Pimpernel.  Along came Zorro, Buck Rogers and the Lone Ranger, the Avengers and X-Men.  The list goes on and on and the media it appears on has broadened considerably.

My initial years of comic-phobia, that began years after the genre gained popularity, raced by and eventually came to an end.  As sophisticated teenagers the chase, thrill and anticipation became too passé.

On the other hand we still watched the TV series and eventually the movies.  Maybe it was the superheroes in tights, tights shorts and bodices.  Oh well you know what it is like at that age!

Influence on other media

Finally science fiction and fantasy started being taken seriously and the superhero theme flamed into life with the earlier mentioned TV series.  Movies began to feature science fiction themes.  I can remember going to the local matinee during my elementary school years.  The theatre was great.  All parents from outlying areas dumped the kids at the matinee where the film was usually a great science fiction or fantasy one.  They picked us up from a central location afterwards.  In winter the skating rink.  In summer on the coin operated horse at one of the local department stores.  And someone at each always looked out for us.  Those were the days when superheroes were watched by us and not needed by us for protection.  That need has grown over time as more social issues developed. 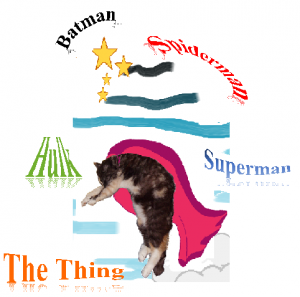 With ongoing developments with movie techniques and their accompanying equipment the newer movies became more sophisticated and visual.  Movies progressed from film to video, dvds and now the internet via mobile and computer means.

There has been a vast expansion of superheroes.  Now not only the Batman and Robin, Superman, Spiderman, accompanying villains and all the ‘other old’ heroes existed but along came the X-men, several updated Avengers teams and Justice Leagues of America.  Then there was Indiana Jones, Harry Potter (super wizard too), and the animated ones with Simba the Lion King truly overcoming the bad guy.  And the list goes on and on.

Divisions in the Ranks

There are two basic trends with superheroes.  The first is the special powers (magic) of some.  And the other is the lack of special powers (wit and strength).  Good examples are Superman and Batman.

Within each of these exist the good guys and the bad guys.

Often each trend contains exaggerated text or speech, action and costuming.  There was a ‘campiness’ about some of them, in particular Batman with the drama and glamorous dress sense and theatrical gestures.  But oh boy what fun they were.

As for innuendo, as children that went right over our heads as we were way too busy having fun and our attention was not constantly focussed on innuendo or double meanings.

Now-a-days we probably create the innuendo.

If you like reading, watching or listening to Superhero tales saunter on down and browse superhero products.  The easiest way to do this is to visit Forbidden Planet and Kobo eBooks.

I’ll let the local super vandal wrap this up after she takes care of that educational hero (that’s debatable) newspaper. 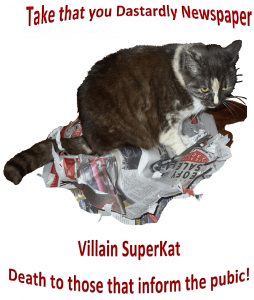 Look out superman, batman, spiderman and in particular cat woman.  You have competition.

I would love your comments or questions on superheroes and suggestions for any topics you would like to see on this site.  And I will return the favour even if the answer is ‘I don’t know yet but will find out!’