Within the realms of fantasy, as the night changes to day at dawn, the spirits of woods, air, fire, earth and water either emerge to light or slowly become enfolded within their other existence.
Over many centuries the indigenous of most, if not all, countries have created an extensive and fascinating range of spirits inhabiting most elements on earth, using the energies of nature for their performance, whether benign, mischievous or downright evil.

The spirits appear to form four groups these being the elemental spirits of earth, wind, fire and water. They are as numerous as human imagination allows and that is almost, if not completely, infinite. A fifth group is comprised of the spirits of the woods and other plant life. In the general terminology I think that this group is included in the main group of elemental spirts of earth.

Each type of spirit is limited to one and only one of the elements. Gnomes are related to earth, Undines are related to water, Salamanders are related to fire and Sylphs are related to air. Each of these types is comprised of an assortment of beings; for example in Naiad mythology Undines contain Naiads, Nereids and Oceanids while Gnomes include Brownies, Dryads, Elves, and Satyrs. Often Dwarves are used in fantasy but they are not listed in the general earth group headed Gnomes. As I personally don’t use this term to define any human condition I have no problem leaving it in the fantasy category.

There is a wealth of information describing these beings on the web therefore I am not going to go into too much detail here.

Being far too numerous to detail I am going to look at woods and water nymphs in this post and at that it will only be an overview.

Wood nymph dryads are a group commonly associated with science fiction fantasy authors. Mostly in the fantasy genre they can be part of a totally fairy like tale or intermingled with as part of a “real life” adventure.

Authors that spring to mine for the “real life’ (Urban Myth or whatever other title exists) tales are excellent story tellers such as Charles de Lint and Traci Harding. Tolkien in his fantasy trilogy “The Lord of the Rings” had his Ents.  The Hamadryade are a branch of dryads where the spirit can’t leave their tree. In my opinion this sounds very similar to the Ents who are the trees.

Most nymphs are considered to be female with the males be very rare and apparently fickle. The males, or Drus, don’t appear to be very dependable, reneging on responsibility where ever possible!

Earth nymphs are often not to kind to humans as they include beings that disturb the earth, that is cause earthquakes and or cause volcanic eruptions that often send molten rock, solid rock and gases cascading forth and causing injury or death. For instance one of the earth elemental spirits of Chilean, Cherufe, required sacrifice (usually human) to keep this magma spirit calm. 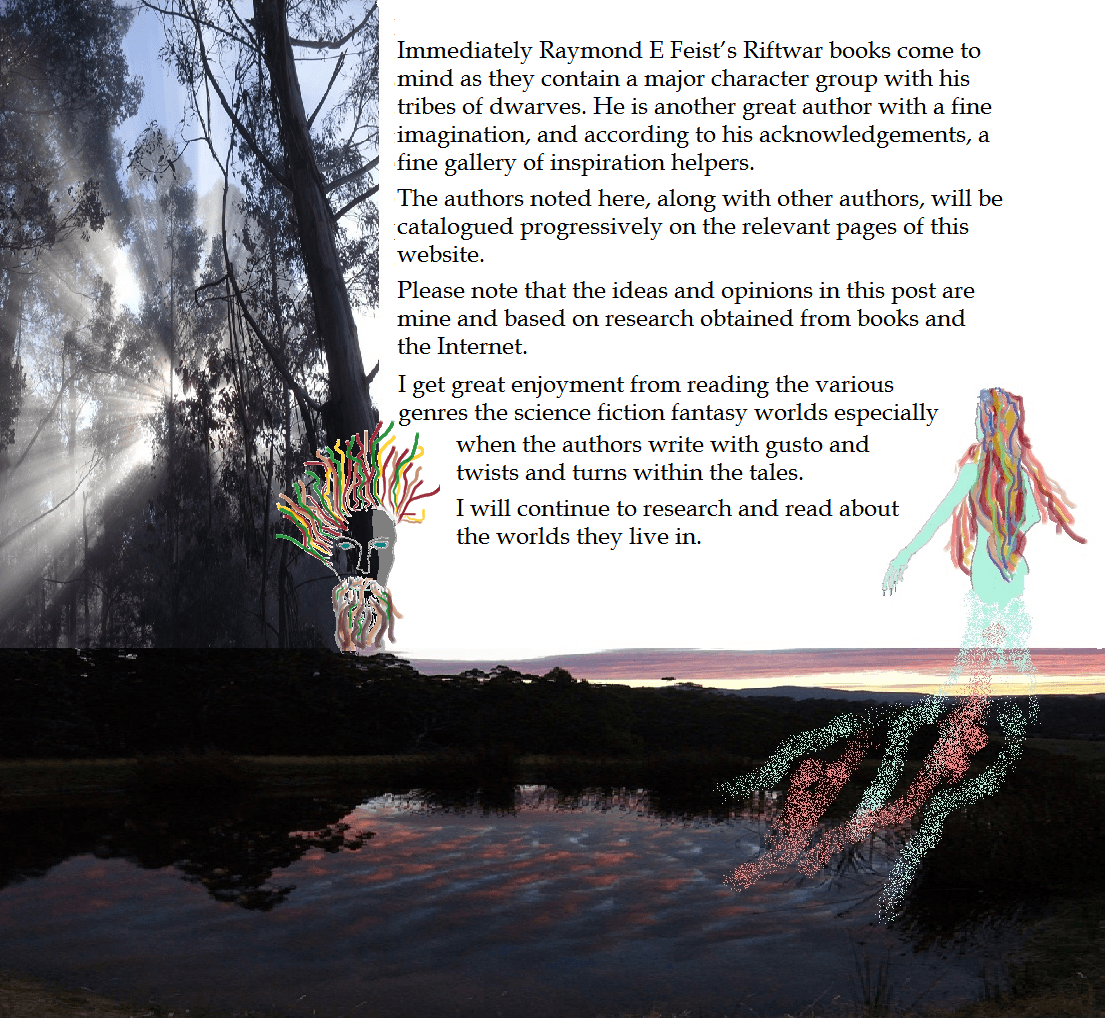 To view the authors mentioned here please travel through and space to Booktopia.